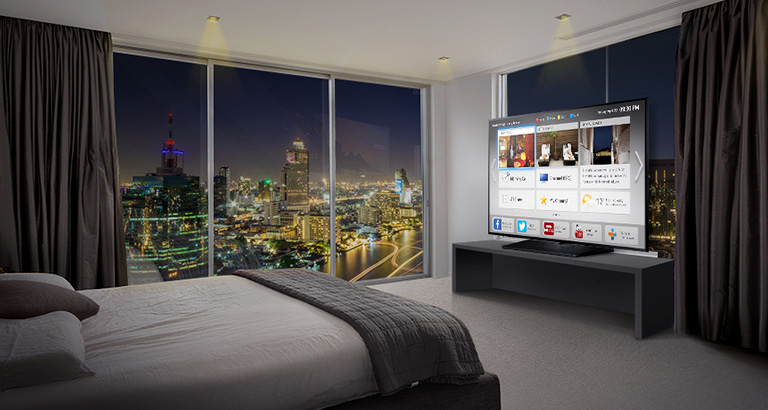 1) How does a hotel TV system work?

Hotel TV systems, sometimes also referred to as Hotel TV, are the in-suite television content presented in hotel rooms, other hotel environments and in the hospitality industry for in-room entertainment. They are the foundation for delivering direct entertainment to guests with hospitality TVs. These types of TV systems are also used in hospitals, assisted living, senior care and nursing homes.
These services may be free for the guest or paid, depending on the service and the individual hotel’s or hotel chain’s policy. Generally these services are controlled by using a remote control directly by the user.

2) What are the different types of hotel TV systems?

Hotel TV systems are divided into several categories L-Band distribution systems:
• HD Headend Systems – Pro:Idiom or digitally-encrypted for high-definition Satellite TV Programming from DIRECTV and Dish Network
• IPTV- based – We cover all of the details of this category in Question #3
• DIRECTV Residential Experience for Hotels (DRE) DIRECTV COM1000 / COM2000 System

Interactive services can include:

3) What is IPTV software?

This service is delivered over a network, such as the Internet, instead of being delivered through traditional terrestrial, satellite signal, and cable television formats. This system requires a CAT 5/6 wiring set up, and cannot work over coax.

IPTV services may be classified into three main groups:

4) What is the process for installing a hotel TV system?

There are several important details to understand regarding the wiring and installation of Hotel TV Systems. The type and configuration of your hotel tv system wiring will determine what television system type you can take advantage of and the type of HDTV you should purchase.

2. What is the configuration of the wiring for your hotel TV system:

After determining the type of system, encryption and TVs that are best for you, you still need to choose a supplier of the actual television programming.The 1st choice you have to make here is what definition you would like. If you have purchased 1080P enabled televisions, you will want 1080p or Blu-Ray quality programming.

We help you to find the programming package that best fits the desires of your guests and your budget.

5) What are the best manufacturers of hotel TV systems?

There are five primary types of HD Hotel TV systems on the market currently. Our hospitality technology experts can help with the consultation of which one best fits your needs.

The New DIRECTV COM3000 Headend by Technicolor is the latest in a line of revolutionary headend television systems from DIRECTV. It is the smallest and most powerful headend TV system available for hotels, RV parks and campgrounds, assisted living facilities, senior living facilities, healthcare, college and corporate campuses, institutions, bars, restaurants, and other commercial applications.

Technicolor COM2000 HD Headend SystemThe COM2000 is an upgrade to the COM1000 that has become the industry standard since its release in 2009.

This plug-and-play system drastically reduces the required space (3U) and energy consumption (225w) for a hotel headend system. The COM2000 is optimized for any of the current DRM encryption systems.

The industry standard in HD Television Systems for hotel properties over 250 rooms or that have brand standards requiring Pro:idiom DRM encryption.

It’s a groundbreaking system that provides hotel guests with the same TV experience they get at home: full channel availability and a Co-Branded welcome screen system, which includes local information and checkout features.

An L-Band Hotel TV distribution system is a television system for multi-client properties where the programming from satellite antennas is distributed via coaxial cable to the room where a receiver placed at each television is used to make the channel selection and provide DRM encryption.

This is the most common type of hotel TV system found across the US (with over 20,000 installations according to the SBCA).

If you are using an IPTV-based hotel television system, the TV programming is distributed from your television headend to your guests’ rooms via your hotel’s Local Area Data Network (LAN) via CAT 5/6 cable.