You can now get Smart TV features over COAX without the need to rewire or change the existing infrastructure. 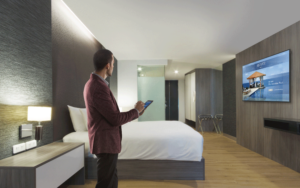 Prior to this, if a hotel wanted a Smart TV with their existing coax structure, they would’ve been forced to rewire or use the Wi-Fi bandwidth at the property. Instead hotels can now purchase 1 server to translate the IP signal into their existing coax cabling which will then be transmitted to all the 694 Series TVs. The new Samsung 694 Series is available in 40-inch and 50-inch with all the standard smart hospitality features that you require.

Traditionally, television content has been delivered over coaxial cable and 80% of hotels still have this infrastructure. Coax functions as essentially a direct line, delivering one-way radio frequency (RF) broadcast which has a very small capability for user interaction. This places most hotels at a huge disadvantage since smart TVs have become the norm in homes; at least 2 out of every 5 households subscribe to a video streaming service. Samsung has responded to this demand with the remarkable 694 Hospitality TV Series that supports the use of smart features through coax infrastructure with no need for a CAT 5 or CAT 6 cable to the TV.